SUPREME NEWS: Abba Kyari’s last statement to the world before his death 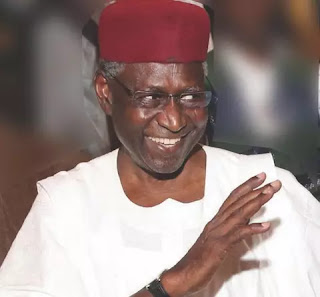 Six days after he went on self-isolation following the confirmation of his COVID-19 status, Abba Kyari, former chief of staff to President Muhammadu Buhari, issued a statement on his health.
There had been rumours about his health condition, with some even saying the president’s right hand man had been flown abroad in an emergency.
Some also said he had died but in a statement he personally signed, the deceased said he was looking forward to resuming at his desk.
He had said he was feeling well but would move to Lagos where he had made his own arrangement.
Below is the full statement:
“I am writing to let you know that on medical advice, I will transfer to Lagos later today for additional tests and observation. This is a precautionary measure: I feel well, but last week, I tested positive for coronavirus, the pandemic that is sweeping the world. I have followed all the protocols government has announced to self-isolate and quarantine.”
“I have made my own care arrangements to avoid further burdening the public health system, which faces so many pressures. Like many others that will test also positive, I have not experienced high fever or other symptoms associated with this new virus and have been working from home. I hope to be back at my desk very soon. I have a team of young, professional, knowledgeable and patriotic colleagues, whose dedication has been beyond the call of duty, who continue to work seven days a week, with no time of the day spared. We will continue to serve the President and people of Nigeria, as we have for the past five years.”
“I want to thank all our fantastic, talented and brave healthcare professionals, working across the country in such a difficult time; all the good Samaritans looking out for the most vulnerable in our communities; the key workers that will keep our country going through this; friends and family and often strangers, who have sent me such warm wishes and displayed such a generosity of spirit.”
“We should be calm, measured and diligent – be meticulous in your hygiene, especially with cleaning hands, if possible stay at home or keep your distance. Listen to good advice from the proper authorities: pay no heed to quack cures or fake news from social media. President Buhari will do whatever it takes to protect the health and safety of our people and get the country back on its feet as soon as possible.”
“Like the whole world, we are dealing with a new disease. Our experts are learning more all the time about coronavirus, what it does and how we can combat it. What we do know is that while some may become very sick, many others who contract the virus will not, and may have no symptoms at all. This is a disease that recognises no difference between north and south, men or women, rich or poor. We are all in this together.”
Sincerely
Abba Kyari
Chief of Staff to President Muhammadu Buhari

Looking for something? Search below